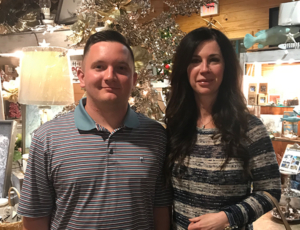 A Mobile native, Nick became a part of the YRGC family at a point in his young life when he had lost all hope for a better future. His mother and father had both passed away during his teen years, he was jumping back and forth between jobs, had no stable place to live, and was struggling with drug addiction. His life was spiraling out of control.

After losing his father from cancer at 14-years-old, he made the decision to turn from God. His mother struggled with her grief trying to raise Nick and using drugs as a coping mechanism. Soon, she and Nick even began to use drugs together.

He dropped out of school at 16 and continued diving deeper into a lifestyle of drugs and partying. At 19, his mother made the decision to take her life and he found himself completely alone and addicted.

His intense self-hatred gave way to further drug use, now also doing meth and opioids. Nick’s sister reached out to him with information about Youth-Reach. He called and shared his story with a staff member, but rejected the invitation to get help at that time.

Shortly after his 21st birthday, he decided to call YRGC for a second time and finally began the process of healing and transformation. He was finally ready to take steps towards breaking free from a life of emotional pain, defeatist mentality and addiction.

A couple months after coming to Youth-Reach, he was still very skeptical. Nick didn’t feel like he belonged for a long time. It was foreign and uncomfortable to him having people who genuinely wanted to put his best interests first.

It wasn’t until month three that it really started to feel like family for him. He also started to feel God’s presence around that same point. At month four, Nick was baptized on a cold January day and became fully engaged in learning how to become a strong man of God.

Around that time, several new residents arrived and Nick began developing relationships with them. He then found it much easier to break free from his reputation and just be himself. He had a chance for a fresh start, building on who he was now in Christ instead of who he had been. The idea of brotherhood became infinitely important to him and he even began developing closer relationships with staff.

He graduated this past September and became part of the transitional living phase of Youth-Reach to work on establishing a healthy, independent lifestyle for himself. Nick is currently learning how to successfully manage his finances and resist temptation as he returns to life outside of Youth-Reach.

When asked what he believes is important for people to know about Youth-Reach, Nick responded:

“Youth-Reach is for the lost, those with no hope and no direction. It’s for everybody who wants to come and meet God. If you’re tired of fighting with the world and are ready for God to start doing the fighting for you, then come. God doesn’t lose battles. It’s not just for the drug addict or the depressed, it’s for those who don’t have family. It’s not a rehab or recovery program, it’s a family.”

Nick is asking for prayer for peace and the finances he needs to start the next chapter of his life, independent from Youth-Reach but built on the strong foundation he is gaining here.