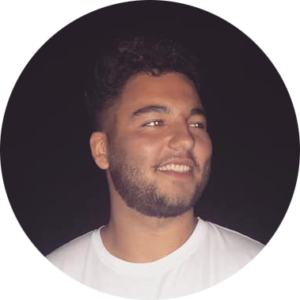 Nikolas graduated high school in 2017 as a varsity football player with no ambitions for the future. Instead, he began working at a fast food restaurant and bounced around working for a handful of other burger joints. A young man with work ethic and authority issues, his job status quickly shifted to “unemployed” and he spent the next nine months living without purpose in such a way that eventually led his parents to ask him to leave their home.

Nikolas vividly remembers the day he was kicked out; it was a late night in mid-April when he left his parents’ house headed for a nearby park. Feeling hopeless and alone, Nikolas planned to take his own life that night. Instead, he returned to his parents house to apologize and ask for help. Prompted by his parents, Nikolas soon received a call from Youth-Reach Gulf Coast (YRGC) to begin taking his first steps toward living a stable, emotionally and spiritually healthy life.

His first few months as a resident, Nikolas continued many of his same, destructive behaviors. It wasn’t until YRGC Director, David Williams, confronted him that Nikolas began to change. He no longer wanted to be a “prideful jock,” but instead live his life as a man of God.

Nikolas spent the next nine months studying the Bible and learning what it means to pursue Jesus. The staff helped him find his identity in Christ and “walk with humility” as a loving member of the YRGC family. He began to understand that, “the staff are there because they love you, they love God, and want the best you.”

After graduating last April, Nikolas felt called to sing, serve, and lead by example as a worship leader. He spent the last four months working hard to raise the funds he needs to enroll in the Youth With a Mission (YWAM) Nashville Discipleship Training School and has already almost raised the entire amount.

Nikolas has one piece of advice for young men struggling like he did:

“If you’re trying to please man, it will always end in failure. But if you find yourself in God and understand how much he loves you, you’ll find your true identity.”

Nikolas’s story is just one of many here at YRGC. Because of the generosity of our supporters, we are able to provide 24/7, 365 day-per-year Christ-centered residential support to other broken young men like Nikolas. Residents and their families are never charged for the services offered.

We ask that you prayerfully consider partnering with us to help provide more young men with the life-changing opportunity to join the YRGC family. Thank you for your consideration and taking time to read Nikolas’ story!